Once again January is Burns Night. This time on Jan 18th I was with Bernard in Salford. As well as playing for dancing he played while the guests assembled, piped in the haggis (on an accordion)  and sang for them.
It was just as well that they had not booked a large band, half of the room was cordoned off and arranged as a set for Coronation Street.
Jan 25th saw me with Forlorn Hope in Nantwich museum, C17 music, songs and dancing as part of  Holly Holy Day (the sealed knot re-enactment of the battle of Nantwich)
I didn't stay to watch the battle as my grand-daughter was dancing in a ballet show.
Then home for a meal and another change of costume and up to Stand Golf Club for their Burns night Dinner / ceilidh with High Jinks. A full floor, lots of dancing, and a little bit of chaos, as usual.

High Jinks also played for Adlington Dance club's dance the next Saturday, a versatile group.
Posted by Mo at 07:11 No comments:

Another repeat booking. In the Autumn I called for a church anniversary dance in Sale with Bernard Cromarty. 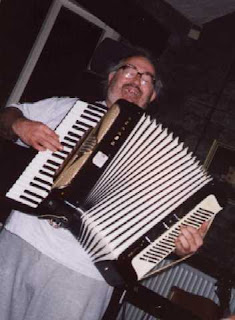 We were invited back for Ken's 70th birthday.

Judging by his cake Ken is a man of many, varied interests, and the guests included people from all parts of his life. All good dancers. We danced some dances I often call.

And some I do less often 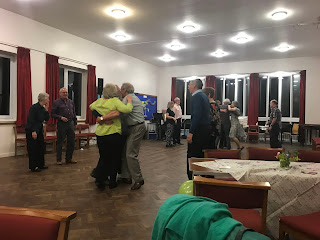 I had a request from one of them (identified as a Morris-man by his reaction to Bernard's warm-up tune) for a dance that I usually only call at clubs. Luckily I had noticed that Bernard's tune book included tunes for some dances I had asked him to play when I called with him at Contra club. So we had a quick practise after our supper and they danced Duke of Kent's Waltz in the second half. Managed it very well too. 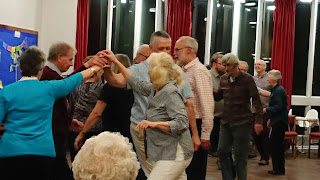 I think some of the guests were tiring by 10.45, when I was trying to fill the second set for the last dance. Bernard was reminded of a corny joke (you don't just get music from Bernard).
How many ceilidh dancers does it take to change a light bulb?
Just one more couple.

Since the beginning of the year I have danced and called at Stockton Heath, Adlington and Hawk Green clubs.

Each club has a rota of callers so the dancers get variety and callers can research interesting dances suitable for the members. I try to mix gentle dances with lively,  easy and/or familiar dances with newer or more challenging. Though dances are made up of the same building blocks they can be put together in surprising and satisfying ways.

In Feb I also called with Hi Jinks at an 80th birthday. The family were experienced dancers but wanted dances that all the guests could enjoy. So on the whole I kept it fairly simple, we did do the birthday girl's favourite dance - at first I thought she might have been right to think it was too hard, but after a couple of false starts we got there. (Well it would be boring if no-one ever got confused - though I try not to leave everyone completely bewildered.)
Posted by Mo at 12:43 No comments:

Before travelling to Stand I spent the morning in Nantwich museum calling some seventeenth century dances as part of Holly Holy day, commemorating the battle of Nantwich.
Less than 2 weeks later I was there again, this time for the Dementia support group. I tried out some 'sitting down dances' as well as a few of the more usual sort.
On both occasions the hurdy gurdies and crumhorns aroused plenty of interest.
Posted by Mo at 12:21 No comments:

And the ceilidh at Stand, with Hi Jinks.
I tried out some new dances this year since I knew the regulars would cope.
Posted by Mo at 12:13 No comments:

Another night of calling to excellent music. I enjoy a good fiddle and marvel at how different they can sound in different hands.
Don made his sing when we played for the Cathedral ceilidh. Ably backed up by Tony's guitar, John's assorted plucked strings, and Gordon's percussion.
Posted by Mo at 14:53 No comments:

The day after the birthday party with Bernard I called with Hi Jinks for a 21st birthday - a complete contrast.
The first had a lot of small children (grandchildren of the birthday girl perhaps), bright lights, a wild evening, not one for my harder dances.
The second was equally wild but in a more controlled way. So I called all the dances that I hadn't been able to call the night before and they stripped the willow, went on a star trek, dipped & dived and enjoyed the festivities.
It was the second 21st party that Hi Jinks had played for that family - nice when people ask us back.
Posted by Mo at 12:59 No comments: